Thank you for your patience while we retrieve your images.

27 photos
My Grandfather, Stephen Brod, was a tailor in Kansas City, Missouri. Truman was a U.S. Senator in Washington D.C. when introduced to my Grandfather by Ted Marks. Mr. Marks was Truman's tailor for many years and upon retiring from the profession it was my Grandfather he recommended to Senator Truman in 1944.

My Grandfather continued to tailor handmade suits for Truman throughout his Presidency. He visited President Truman at the Whitehouse in Washington, DC. One of those visits he was flown to Washington via a small Naval airplane to put the final touches on the tuxedo President Truman wore at his inaugural event. This was before the comfort of private chartered jets. Grandpa said he was never more sick being buffeted around by the wind in that small plane. He refused to fly back and instead was provided transportation by train.

There are letters from the White House to my Grandfather signed by President Truman. Kansas City Times newspaper articles and Western Union Telegrams. I still have a couple more items yet to be uploaded.


These are photographs of the actual documents.


All Documents in Date Sequence

***You can place the cursor on an image and click for a larger view. Click again to return to the small image. 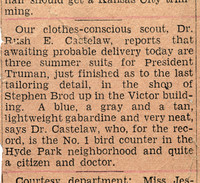 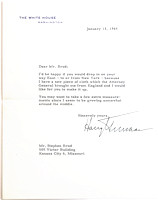 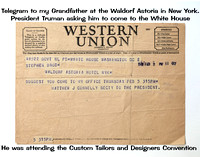 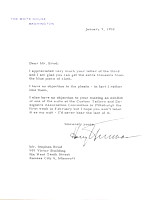 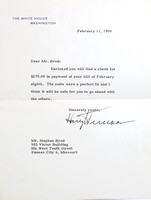 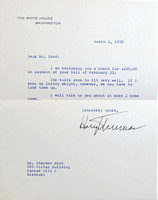 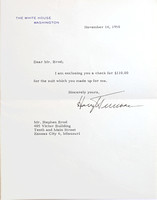 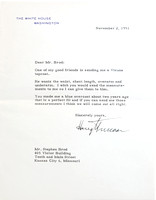 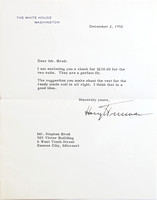 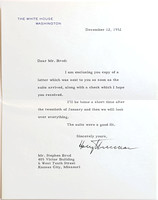 Guestbook for Harry S Truman Letters
Karla(non-registered)
Chris I was thrilled to review the correspondances and documents you have, between your Grandfather and President Truman. Thank you for sharing them, I can't wait to show my Mom.
The guestbook is empty.
Loading...
© ChrisAndersonImaging
Powered by ZENFOLIO User Agreement
Cancel
Continue